.... it's been a really fun holiday weekend here in Novi.  We've been incredibly lucky with the weather here - it's much warmer than normal and I think everyone has been enjoying it.  On Thursday we drove around looking at various locations that we might like to live, and decided that we should go back on Saturday to see what they're like when open.

Saturday - our first stop today was Barnes & Noble Livonia at Haggerty Road.  Jonathan is back at work today and I needed to get some books, and craft magazines, to last me the week.  Originally I had planned to hire a car so that Kathryn and I could get about this week, but I left my licence at home!!! Doh!  So, we had a great time checking out the books; I got a couple of books plus several crafting magazines.

Then we headed back towards Plymouth.  It really is a very pretty town and there are lots of shops in the town centre.  The people we spoke to were really friendly and Jonathan was even recognised in the Cozy Cafe (a place that could become a firm favourite) when we stopped for pie and coffee!!  We also took the opportunity to have a look at some of the residential areas around Plymouth - and we really like it.

Next we headed towards Northville; we took a bit of a scenic route, but the road system is reasonably easy to negotiate and we got there safely.  We found another really friendly town, and another place that I think we could happily settle.  I think Northville is a bit bigger than Plymouth - there are certainly a few more shops in the centre.  We spent a good hour or more walking around the shops and taking photos.  Here are a few photos of Northville. 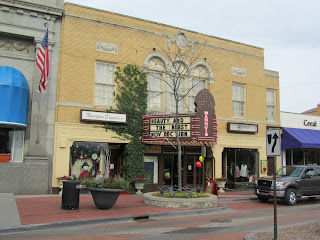 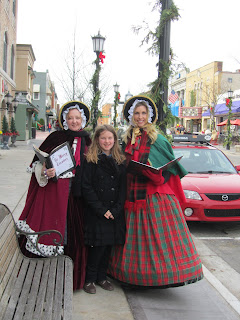 These ladies were out carol singing and were kind enough to allow us to take their photo, of course we had to have Kathryn in the picture too.  The ladies were both so kind, and one told us that her Mum originally came from New Malden in Surrey! 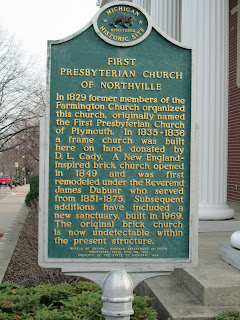 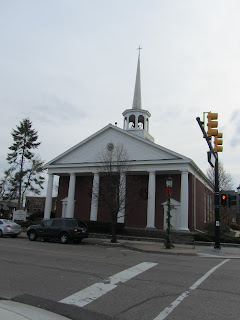 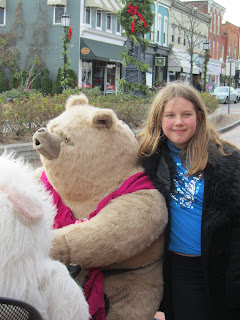 In front of one of the coffee shops we found these fab teddies sitting in chairs out the front!  I couldn't resist a picture!! 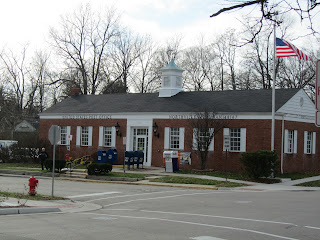 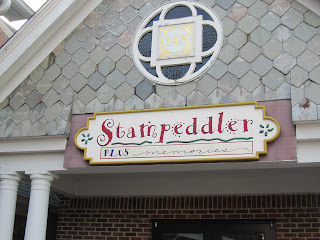 As we walked around the town we came across the sign above - the place didn't look open and I was read to walk on, but Jonathan walked up to the door and said, "It's open!"  and we went in.  It's a fantastic craft shop full of wonderful goodies, I actually squealed when I walked in :)  It's really big and has such a lot of wonderful products, I could have spent a fortune.  So you will be amazed to learn that I walked out without buying another.  Really!!!  But hopefully in the New Year it will become my local craft shop, not that I base the decision on where we live on the availability of craft shops ;)))))))) 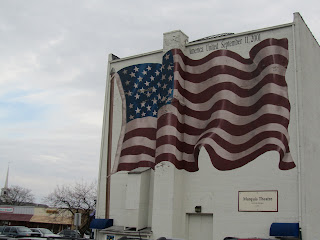 One thing that I have noticed, is that parking is free in most of the towns.  And when we returned to our car we saw this mural on the back wall of the local theatre.

Sunday - today was going to be another day out, but Jonathan had done so much driving and we've been really busy, that we decided to have a quiet day.  And the weather helped with the decision.  It was much colder and really, really wet!  We went over the road to Emagine - the cinema opposite Jonathan's hotel.  It has 18 screens and is huge!  We settled on Hugo - a really lovely film set in the 1930s about an orphan, Hugo, who lives in the walls of a railway station and winds the clocks.  Hugo is also restoring an automaton which has a mystery attached.  It's a really beautiful family film - we had a great time.  After a super dinner in the local Mexican restaurant we headed back to the hotel.

And that brings me up to date.  At the time of writing this post it is 8.45am, Jonathan has gone to work.  Kathryn and I will be going to the local Mall(s) - they are close enough to walk - which is good.  Kathryn wants to visit Toys 'R' Us and I want to pop into Michael's (again).  I think that it's best we do the walk over today as it's dry and sunny, but cold.  And the forecast for Tuesday and Wednesday is RAIN!!  Lots of it, with the possibility of some snow showers.

I'm really enjoying being here and think that we could be very happy living here too.  Hopefully we find out soon about our move!  That's all for now.

Email ThisBlogThis!Share to TwitterShare to FacebookShare to Pinterest
Labels: family

sounds fab Deborah - and basing your choice of town on craft shop availability is a perfectly sound thing to do ;-)
Tara
x

Oh wow, what a fabulous craft shop, I mean what a lovely town lol! How can you resist moving to this lovely place? Great pics Deborah! And well done on resisting the temptation!

Of course you should base the decision on where to live by the craft shop status.....
I've seen this place before on the internet.....any chance of long distance buying...lol
So glad you're having a wonderful time.

Fabulous pictures, Deborah. And if I were in your position I would definitely think seriously about moving there permanently, especially while your children are still young and can adapt easily. We had the chance to move to Vancouver, Canada some years ago, and we made the choice to stay here. We regret it now...If only we could turn back time:)

Enjoy the rest of your visit with those wonderful craft shops and warm hearted people:) x

This all looks so wonderful Deborah! You must be so excited about the prospect of it becoming home!