... Good afternoon!  It's been a busy weekend for family Frings.  Jonathan and I were both at a photo shoot yesterday afternoon - it was such fun and I'll post a few photos here later.  After the shoot we all headed to our friend, Kirsten.  She and her family moved to Michigan from Australia earlier in the summer, so this is their first experience of Halloween in the US!  Kirsten's two young boys, and the rest of the team, had fun scooping out pumpkin innards and cutting designs into pumpkins.  I was one of those busy cutting and getting messy, while Jonathan had the easy job of taking photos!  Again, I'll post a few of those later.  We finished the party with warm pumpkin pie and cream - it was such fun!

My card today, has been made with a couple of challenges in mind: 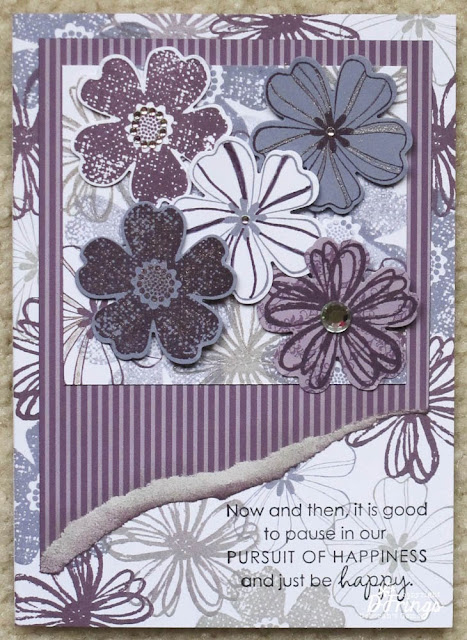 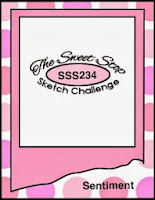 I've used the sketch from The Sweet Stop - sadly it is their very last challenge and while I've not played often, I have always enjoyed the sketches they provided.  As soon as I saw this sketch I knew which stamps I would use.  I created the background by randomly stamping three of the flowers over the card.  I cut a panel of design paper, tearing the bottom and inking for definition.  On the white panel I stamped more flowers and this time added some sparkle with a Sakura Stardust pen.  I stamped a few more flowers on scrap card and design paper, punched them out and added gems and sparkle.  All were added to the card with pinflair gel.  I finished the front with this lovely sentiment - telling us to stop and be happy!  The inside is simply a mat in Wisteria Wonder and white card on which I stamped a few more flowers. 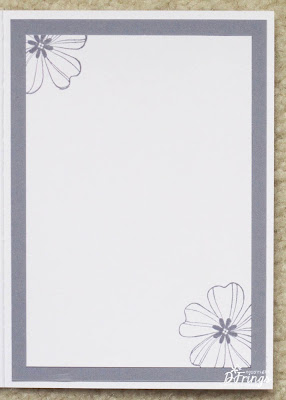 I know that last night and this morning a huge storm hit the UK and that there have been several deaths, and over 500,000 homes left without power.  According to news reports the storm has now moved on, I do hope that all my UK friends are safe and well.  Take care and I'll see you tomorrow.

Fun card Deb!! I always have such a hard time with purple but, this is lovely!! Glad everyone is enjoying the US frenzy that Halloween brings!!

Love the background you made and all those lovely flowers!
Thanks for playing along with Dynamic Duos this week!

So pretty Deb! Love all the blossoms!

Love everything about this creation, the different shades of purple. Thanks for sharing on our last Sweet Stop Sketch Challenge.

Beautiful card! I love all the purple flowers. Thanks for joining us at The Sweet Stop for our final challenge.
Melissa

Gorgeous card Deborah! I love your flowers. Your weekend does sound wonderful, can't wait to see your pictures! Thank you so much for joining us at Dynamic Duos this week!

A beautiful card and I love the sentiment :o)
Jackie xx

Fabulous card Deborah, love those purples and the fab sentiment!
Well it was windy here in Berkshire, and a few trees came down, but really it was over fairly quickly!

sounds like you are having lots of fun Halloween season fun Deborah! What a lovely card in the purple colors - the florals are so pretty!

This looks awesome :) I love the stamping :) Looks like u had a lot of Halloween fun

What a lovely card. I really like the sentiment-very true! So glad you joined The Sweet Stop for its final sketch challenge!
Hugs,
Debbie