.... Good morning! I can't quite believe that it's been just over 15 years since I gave birth to the most wonderful girl in the world! And yes, I do know that I'm more than a bit biased!! Kat is bold, bright, supportive, assertive, creative, caring, intelligent, honest, generous, kind, and I could go on, but I think you get the picture. She's also something of a Goth Girl. Kat loves Halloween, black, alternative music, being with her friends, singing, photography and she's hooked on Glee! I wanted to try and incorporate as much of that in Kat's birthday card as possible: 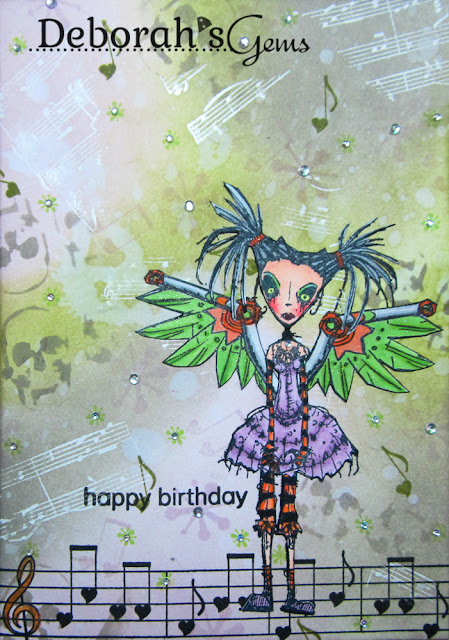 I love the Prom Queen stamp - she's very Goth, very glam and just a bit moody - kind of like a teenage girl! I stamped her on white card, coloured her with Copics and then carefully cut her out with a scalpel. I edged the image with a black pen to hide the white edges. I used Kat's favourite Halloween colours of green, orange and purple. The background is very mixed media with some musical background stamped and then inked over to reveal white music. I added some small skulls with a stencil and randomly stamped musical notes, and little flowers. I stamped the bar of music at the bottom of the card to ground the image. I stamped the Prom Queen directly on the card and added some wings and then adhered the coloured image on top. I added lots of sparkle to the card with little gems sprinkled around the card and used clear Wink of Stella on her wings and dress. I also added some orange sparkle to the treble clef. I think this card really captures Kat. On the inside I cut a mat layer of grey card and kept the white panel fairly simple. I stamped a bold birthday greeting and added another Prom Queen in the corner. I also decorated the envelope. 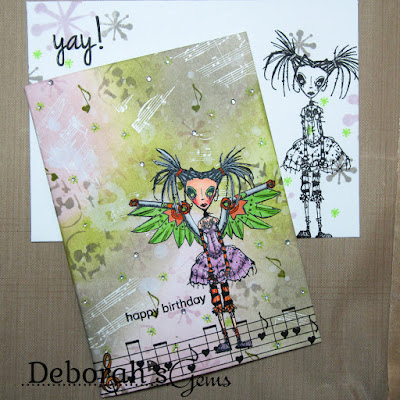 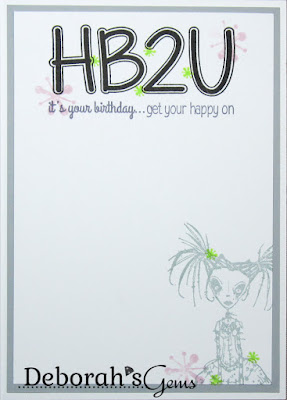 I'm submitting this card to CAS-ual Fridays Challenge - CFC#156 where the team would like to see Dimension and Bling, and also to Addicted to Stamps and More! - ATSM#211 where it's Anything Goes. Before I go, here's a close up of the sparkle on the Prom Queen - the photo is out of focus as I find it shows the shimmer and sparkle so much better: 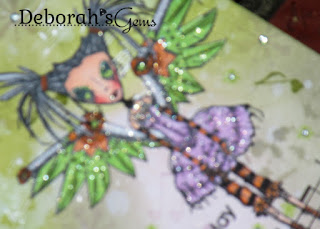 Kat had a really fun day yesterday. Breakfast with us and then out with her friends for the afternoon and evening. Just the way she wanted it! Here's a photo of Kat doing "the Kathryn" taken at Detroit Zoo earlier this year. 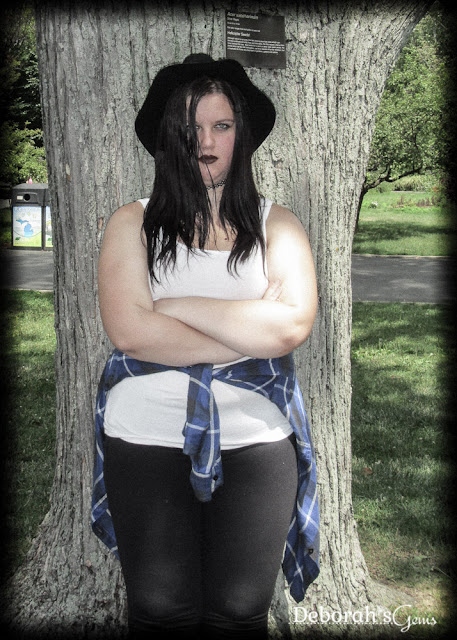 That's all for now - thanks for allowing me to be the proud Mum!

What a fun card Deborah and I love how you created that fab background.
Thanks for sharing with us at Addicted to Stamps and More and I hope you will join us again soon.
Hugs
Carol x

I'm sure your daughter loved this card Deborah - after reading her interests it looked like the perfect stamp to use! brilliant background you've created and I love the strip of musical notes at the base. Thanks for playing along at CAS-ual Fridays!

Super fun card, and it looks like it fits your daughter's goth personality perfectly. Happy birthday to her.

Lovely card. Thank you for joining us at ATSM Challenges. All the very best. Nandini DT