.... Good morning all!  I'm rather late with this post today.  We had a fabulous holiday in Arizona and Nevada last week, but since coming home both Jonathan and I have come down with the cold that Kathryn had.  We've both been feeling really awful, and I can only say that Kathryn was a real trooper last week, as I don't think I'd have managed to cope.  And that's part of the reason this card is late.  Feeling rough and constant coughing has led to lack of mojo!

However, this morning, I think I'm feeling better - at least the mojo is back and I finished my card - it's quite quick, clean and simple: 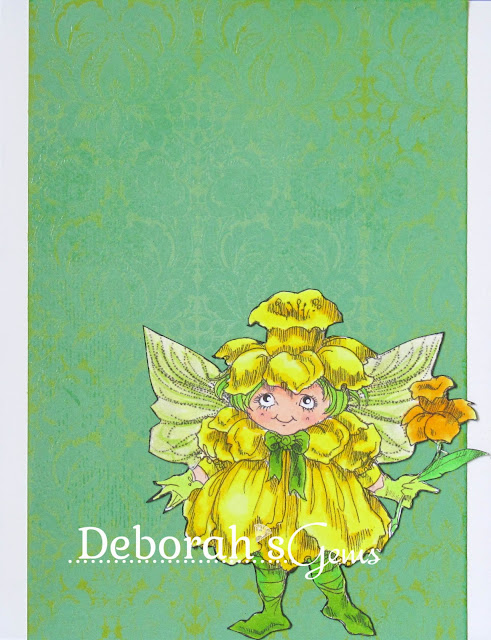 I've had this cute little flower fairy printed for some time, but hadn't got around to colouring her in.  I'm flying back to the UK tomorrow and will be in Wales on Tuesday - the national flower of Wales is the Daffodil, so I decided to make a card featuring Daffo Dill!  You can find her on Rick's Zibbet shop.   I printed her on white card, coloured her with Copic markers, cut her out with a scalpel, ran a black marker round the edge and then added lots of sparkle to her wings with a clear Wink of Stella pen.  I've based the layout on this week's Freshly Made Sketches - FMS#192.  I cut a piece of damask design paper and rubbed on some yellow ink at the edges and wiped off the excess, love the subtle hint of yellow.  I adhered it flat to the card.  I did turn the sketch upside down to work better with my image.  On the inside I cut another sheet of design paper, and on the white panel added a sentiment.  On the little image you can see the sparkle of her wings. 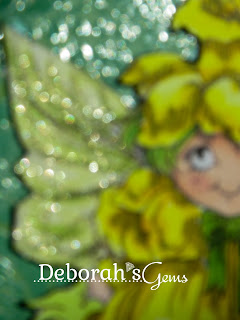 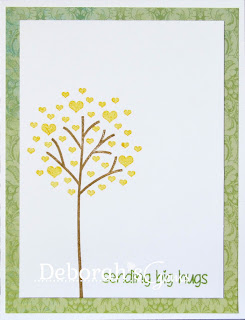 It's not been an easy week for us not only have we had awful colds, but the weather here has been ugh.  Heavy thunderstorms earlier this week and a night spent in the basement.  And today, my last full day in the States for two weeks, I tried to open the garage door to take Kathryn to a friend's house and to go shopping, and the door WON'T OPEN!!!!  I'm so frustrated - I've so much to do, but can't get out of the house!!  Hopefully, it'll be fixed in the next hour and I'll be able to get on. Sorry about the rant!!

But there was some good news this morning - the US Supreme Court have ruled that same-sex marriage is legal in ALL 50 states - and about time too!  So pleased for everyone - and in particular several of my friends.

That's all for now.

I love how you flipped the sketch, added the yellow to the background piece and the gorgeously colored fairy. Awesome card. Hope you and your loved ones are all feeling better! Thanks for sharing with us at Freshly Made Sketches!