....  Good morning!  I have a clean and simple card to share with you this morning.  I used a couple of challenges to make it: 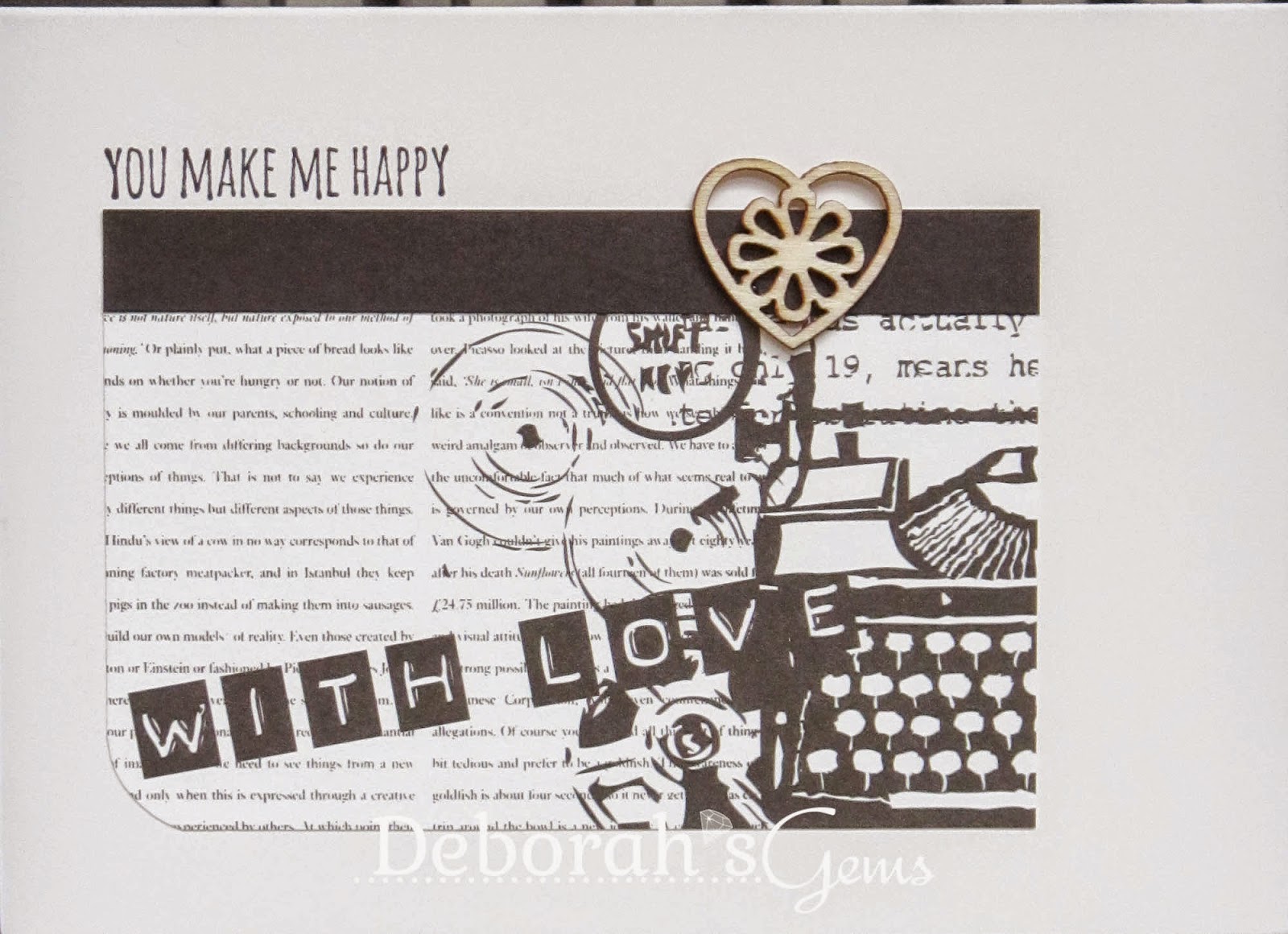 The recipe at Less is More is to use newsprint on your card, and it's taken me nearly all week to come up with something I like.  I was going through my paper stash, found the Papermania pad and in there was this super piece.  I simply cut the page to size, rounded one corned, added a strip of black card to the top and adhered it directly to the card.  I finished it with a sentiment and this fabulous wooden heart (which I think was free with a magazine).  I used the sketch from this week's Paper Players, but turned it to make a landscape card.  On the inside I cut a mat layer in black and a cream panel which I left blank for my own message.

I've included another photo of the card in a square format as I'm fed up of cropping my cards to fit the inlinkz button!  From now on this is how I'm going to post details of my cards. 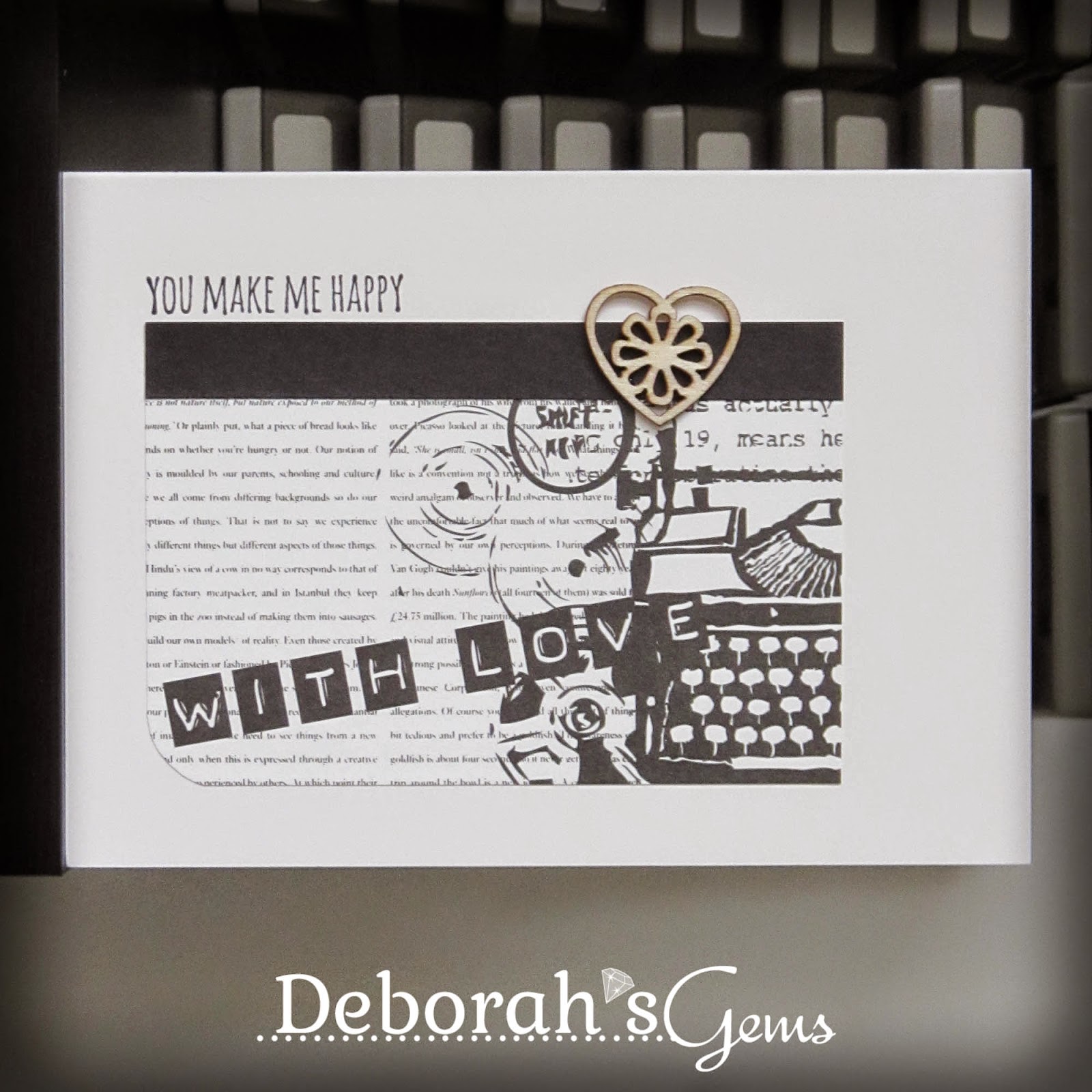 We all went to the cinema last night to see a presentation of The National Theatre's Frankenstein.  The film stars Benedict Cumberbatch as Victor Frankenstein and Jonny Lee Miller as The Creature.  It was absolutely magnificent.  The film was directed by Danny Boyle.  It's so nice being able to see stage plays and operas at the cinema - you don't get the whole atmosphere, but you do get to see first class performances locally.

Frankenstein was originally a stage show at The National Theatre in 2012, where Cumberbatch and Miller alternated the roles of The Creature and Victor Frankenstein on a nightly basis.  They both won the Olivier award for Best Actor in 2012; having seen the film, I can see why - they really deserved it!

Before I go, I'd like to give a quick safety message.  If you have a tumble dryer in your house, make sure you get it cleaned on a regular basis.  I was using my dryer on Tuesday morning when I smelt burning, like burnt elements.  I turned off the machine, made sure there was no actual fire and called an engineer.  He came out that afternoon, confirmed that there was lint in the machine and that it had indeed been scorched.  Alf sorted it out and the dryer works fine again.  It was a good thing I stayed in the utility room to fold laundry, if I'd left it could have been so much worse.  Now I'm off to do the ironing that resulted after Tuesday's wash!

Have a great day and see you soon.

I love how you turned the sketch..and that wooden charm is awesome.The black and newsprint look so sharp! Thanks for joining us this week at The Paper Players!

AND thanks for the heads up on the dryer..I will go check mine!

A great design so well put together Deborah !!

This is great Deborah!
I love that little wooden heart... it really adds something!
SUper card.
Thanks so much
Chrissie
"Less is More"

Love that you flipped the sketch on its side, it looks great! What a fabulous find in your newsprint paper too....great for both challenges! Thank you for sharing with us at The Paper Players!

Terrific card! The newsprint paper looks lovely and the wooden charm adds the perfect touch. So glad you shared your creation at The Paper Players.

Fabulous design Deborah!
Glad to hear you didn't fall foul of the old Lint in the tumble dryer.......I try to convince my niece to check hers regularly after finding it full last time we stayed at her place!!!

Very stylish card Deb, love the wooden heart added
Thank you so much for joining us this week at Less is More
Anne
LIM Designer

Clever use of the patterned paper, Deborah! Love the black and white design with the wooden heart :)

Fun card; it looks so cool turned on its side and I love the paper you used! Thanks for playing with our challenge this week!

Love your monochromatic card and the fact that you turned the sketch on it's side. Fabulous card. So glad you joined us at the Paper Players this week
Jaydee

I love your black and white colour scheme and love how you made the flipped sketch work for you. The wooden element adds the perfect finishing touch. Thanks for joining us over at The Paper Players this week!

LOVE the newsprint and that dymo sentiment! FAB card, Deb!

A gorgeous and sophisticated newsprint card Deborah. Ultra classy
Sorry I didn't get to you last week with being away but thanks for joining the challenge.
Sarah xx
Less is More