.... Morning from an unseasonably warm (well, it's relative) Northville.  Yesterday we reached 10°C (50°F) which is about 6°C (10°F) above the average for this time of year.  There's no snow either, not that I'm complaining!!

This is a very quick post as I've got lots to do today.  No surprise that it's a Christmas card.  I've CASEd Joan Bardee's lovely card at MUSE - MUSE#145. 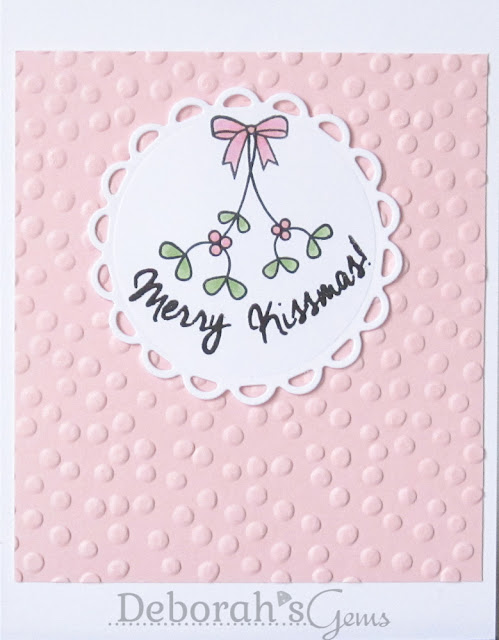 I've kept exactly to the layout and pretty much the same colours.  However, instead of Stickles snow, I embossed the pink card and went over the raised dots with clear Wink of Stella.  I used my MISTI to stamp the image and sentiment - it's so easy to position the words (and re-stamp if needed!).  I cut it out with a pretty circle and coloured the image with Copic markers.  I added sparkle with a clear Wink of Stella brush.  On the inside I cut a mat layer of pink card.  On the white panel I added a Christmas greeting and another bunch of mistletoe. 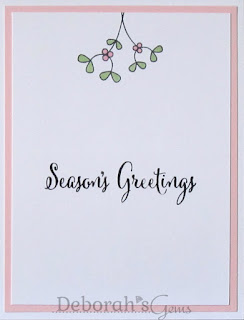 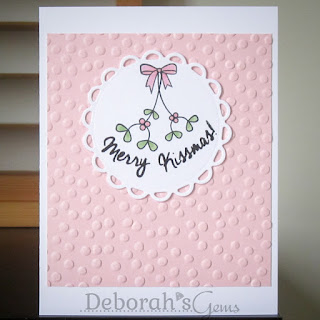 That's all for now - see you tomorrow!

what a sweet Case Deborah - love the mistletoe!

Very pretty - love the fancy scallops on your 'tag' element and the tie in between the mistletoe and your sentiment! So glad you joined us at Muse this week, Deborah!

I Card Everyone said...

As sweet as it could possibly be, Deborah!!
=]

This is just darling, Deborah. I'm not complaining about no snow either although I think it's headed our way.

Love the fabulous texture on your sweet card, Deborah!

Gorgeous take on this week's Muse, Deborah! I love all the texture and the softness of the pink on your background! Beautiful card!

I like the image chosen for this card. It was cute!! It is so nice to add something inside the card too.