.....  Morning!  It's silly warm here, in a relative way of course, and yesterday we had so much rain!!!  I've a birthday card to share with you this morning.  I made this for Kat's best friend, Alyx, who is 15 years old today.  I took Kat over to Alyx's place yesterday lunchtime and we don't get her back until this evening!!! Yea!! 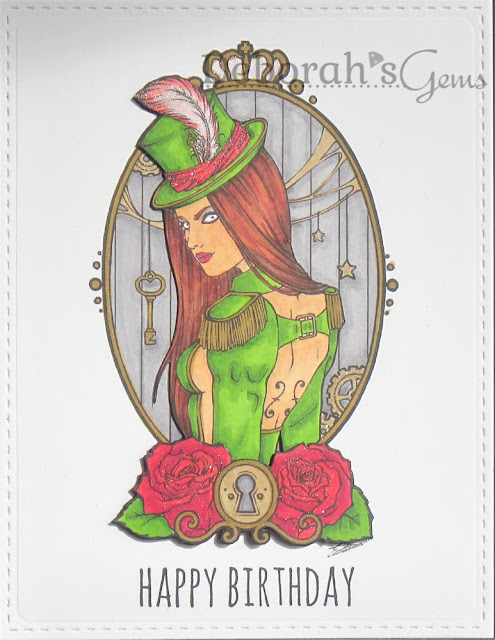 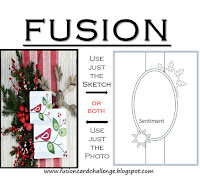 Kat picked this image from my digital collection.  I got it from Sweet Pea Stamps (sadly now closed) and the artwork is by Enys Guerrero - I love her style.  I printed the image three times on white card.  I cut out one image using the stitched edge die.  I coloured the background on this image.  I coloured the other images and cut out layers Minerva as the middle layer and the roses as the top layer.  I used Copic markers and added lots of sparkle to the roses, the feather in her hat, and to the gold edges (see photos at the end of the post).  On the inside I cut a mat layer of green card and added a birthday cake image.  I left the panel blank as Kat wanted to write her own message.  I've based this card on the sketch over at Fusion - FUSION#45 - it is a loose take on the sketch!  Oh yes, I've also used the colours as inspiration! 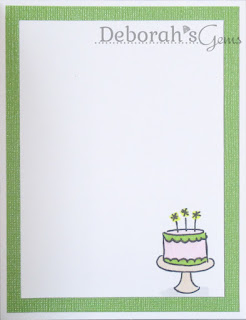 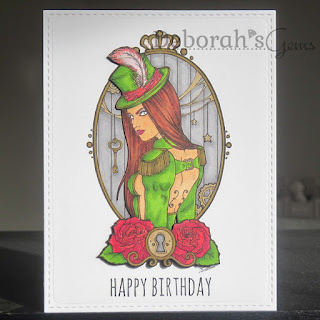 Here are a couple of close-up photos of the sparkle: 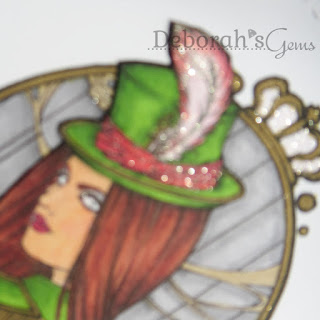 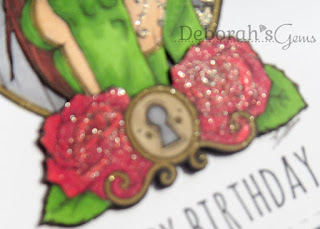 We had a fun day on Sunday making Alyx's birthday present.  Kat wanted to create a personalised memory picture, I think she'd seen something on Pinterest (no idea where).  She collected lyrics from some of Alyx's favourite bands, got quote from some books and also Alyx's favourite quotes.  She finished by picking three photos of them.  We sized them to fit the Stampin' Up! heart punch and adhered them to a green background (Alyx's favourite colour).  We put the finished page in a simple black frame: 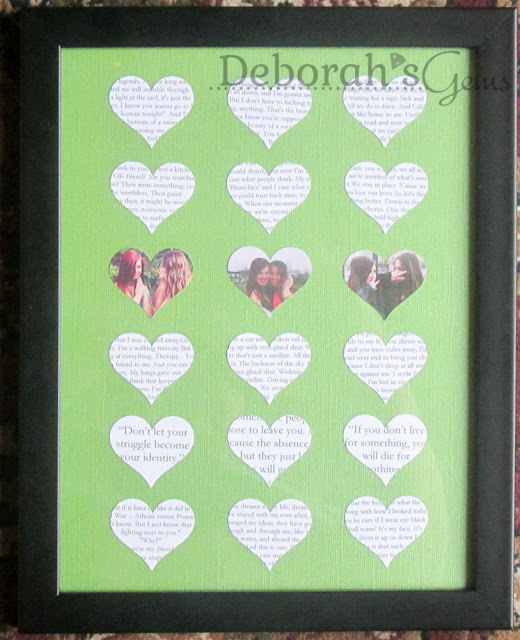 Kat gave this to Alyx yesterday when I took her over.  I'm pleased to say that Alyx was really pleased with the picture and the card!  That's all for today!

Gorgeous take on the sketch ... lovely coloring too ... so very glad you joined us at Fusion Card Challenge.

What a lovely card using the Fusion Sketch Deborah! great coloring and sparkle! thanks for joining us in the Fusion Challenge! Julia xx

Who wouldn't love this card Deborah!?! You added so many amazing details.. love that close up with the glitter, your beautiful coloring, and even a finished inside (something I hardly ever do). Lots of love put into this one and it shows!