We will remember them ...

... it's Armistice Day today; also known as Veteran's Day in the US and Remembrance Day in the UK.  At the eleventh hour of the eleventh day of the eleventh month, we remember the signing of the Armistice between Germany and the Allies signalling the end of the First World War.  Sadly, it was not the end of conflict and wars in the world, and today we remember all those whose lives have been lost in past and present wars.  We also honour those still serving around the world. 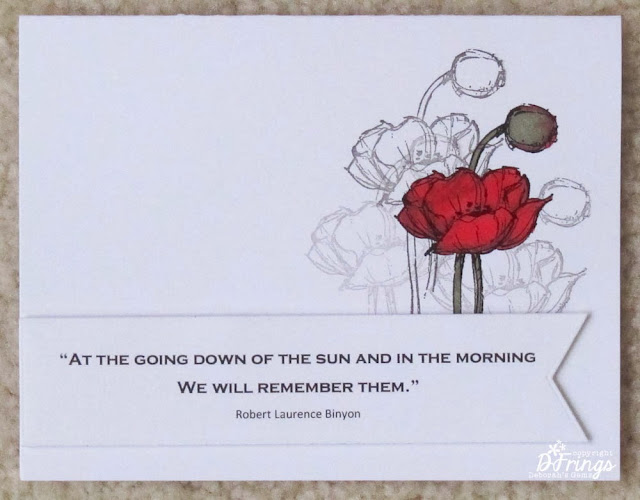 This is ultra clean and simple and has been made with the current The Male Room - TMR#8 challenge where the theme is remembrance.  I produced the verse on my computer and cut it out with the fishtail die.  I stamped the principal poppy and coloured with Copics, adding depth with generational stamping of the poppy.  I attached the verse with dimensional tape.

I don't think there's anyone who doesn't know this quote - it comes from the poem "For the Fallen" by Robert Laurence Binyon.  I've copied the entire poem here:

With proud thanksgiving, a mother for her children,
England mourns for her dead across the sea.
Flesh of her flesh they were, spirit of her spirit,
Fallen in the cause of the free.

Solemn the drums thrill; Death august and royal
Sings sorrow up into immortal spheres,
There is music in the midst of desolation
And a glory that shines upon our tears.

They went with songs to the battle, they were young,
Straight of limb, true of eye, steady and aglow.
They were staunch to the end against odds uncounted;
They fell with their faces to the foe.

They shall grow not old, as we that are left grow old:
Age shall not weary them, nor the years condemn.
At the going down of the sun and in the morning
We will remember them.

They mingle not with their laughing comrades again;
They sit no more at familiar tables of home;
They have no lot in our labour of the day-time;
They sleep beyond England's foam.

But where our desires are and our hopes profound,
Felt as a well-spring that is hidden from sight,
To the innermost heart of their own land they are known
As the stars are known to the Night;

That's all for today.

Email ThisBlogThis!Share to TwitterShare to FacebookShare to Pinterest
Labels: Copics, Die-namics, Stampin Up, The Male Room

Deb, this is beautiful! So simple, but I love your generational stamping, then one coloured poppy. Gorgeous. What a lovely tribute!

What an utterly Perfect tribute!

Perfectly clean and simple, a great card. Thank you for joining us at The Male Room.

A stunning simple, yet effective card, with an emotional sentiment. I especially love the fading poppy, and it's just perfect for our theme at The Male Room

Beautiful card, gorgeous effect with the poppies (I was going to use this stamp myself, but you've done a much better job with it!). I like how you've included the very moving poem in your post. Your card is perfect for our challenge in The Male Room. Thanks for joining in