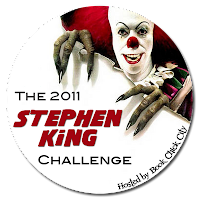 ... it's time for another Stephen King review which is not remotely related to crafting, but is another of my favourite hobbies.  So if you don't like Stephen King - I'll be posting cards soon!  But if you're not sure, or want to see what I thought - read on!


These are the books I’ve read so far on my Stephen King reading challenge.  My initial target was six books in the year, but I’ve read eleven to date.  I think I’ll keep going for a while yet!

My first encounter with The Green Mile was on a date with Jonathan in 2000 – we’d gone to Leicester Square for a “Film Fest”.  The movie was very long, very moving and just brilliant.  Indeed it was nominated for four Oscars – but didn’t win one.  I enjoyed the film so much that I got the book.


Paul Edgecombe, now an old man living in Georgia Pines, a nursing home, is writing about his time in 1932 as Block Supervisor at Cold Mountain Penitentiary, also called “The Green Mile” on account of the lime green floor.  In that year John Coffey, a 6’8” black man who has been convicted of the rape and murder of two small white girls, arrives on the Mile.


On the Mile at this time are several other prisoners; Eduard “Del” Delacroix, who has a special pet mouse called Mr Jingles, and William Wharton (“Billy the Kid” to himself, and “Wild Bill” to the guards).  There are several guards who work closely with Paul, his second in command – Brutus “Brutal” Howell and Percy Wetmore – a young, sadistic guard.  Wetmore takes great delight in aggravating the prisoners knowing that the guard have to be civil because he is the Governor’s nephew.


Percy is offered a job in a local psychiatric hospital but refuses it unless Paul allows him to supervise an execution.  Reluctantly Paul lets Percy supervise Del’s execution; Percy doesn’t follow the protocol for the execution and as a result when the current is turned on Del catches fire and suffers a long and agonising death.


Without giving away too many details it becomes apparent to Paul and some of the other guards that there is something special about John Coffey, and Paul is convinced that John didn’t kill the girls.  John cures Paul’s urinary infection and revives Mr Jingles after Percy stamps on him.  Hal Moores, the Prison Warden and Paul’s friend, is very distracted as his wife his terminally ill.  Paul, Brutal and some of the other guards smuggle John out of prison and take him to the Warden’s home.  Here John performs a miracle – he cures Melinda by taking in the “essence” of the tumour.  On returning to the prison John gives the “essence” to Percy making Percy go mad.  In his madness Percy shoots Wharton and ends up detained in the psychiatric hospital.


Paul investigates the circumstances around the girls’ deaths, and discovers that Wharton actually raped and killed the girls.  Paul wants to stop the execution, but John tells Paul that he’s ready to die, ready to leave this cruel world.  After John’s execution, both Paul and Brutal vow never to be involved in another execution.


Returning to the present day in the nursing home, Paul gives his notebook to a friend, Elaine, and lets her read his story.  Paul introduces Elaine to Mr Jingles a very old and grey mouse at least 64 years old, just before the mouse dies.  Following the death of Elaine, Paul is alone, now over 108 years old and in good health.  Paul is left wondering just how long he will live.


This book is wonderful – I read it really quickly.  SK has written great characters and you develop a relationship with them.  I was in tears when reading about John’s execution – it is really moving – and in the end I felt very sad for Paul being on his own and having no idea how much longer he would live on.  Well worth a few hours of your time.

Interesting - shall have to have another look at this author.
Paula (PEP)

Yeah, a fantastic book, I was hooked all the way through, ands I think I will read it again!

I never read the book but I watched the movie at least 3 times. Priveless, it touched my heart. The cast is amazing and Tom Janls is brilliant. It's the kind of movie that keeps you in your chair and without time to grab something to drink or going to the toilet :). Yes the execution made me cry too.
XX