.... well, the weather wasn't great again today, so Jonathan and I headed off to the cinema for a second Film Fest.  We saw "Rise of the Planet of the Apes".  We'd seen some of the reviews of this movie - all good - so we were really keen to see it.  And we weren't disappointed.  Andy Serkis stars as the ape, Caesar, and he's brilliant.  The CGI effects are superb and the ape is "real"!  The film also stars James Franco as the scientist Will Rodman, who is trying to develop a drug to cure Alzheimer's Disease - the disease that Charles Rodman (brilliantly played by John Lithgow) has.  Testing takes place on apes - and the rest is the film!!  I'm not going to give any more of the story away.  It's excellent, we thoroughly enjoyed the film.  What was really nice is that the film provides a possible reason why there is a Planet of the Apes -  and I remember the first time I saw the original film and the shock at the end which was amazing.  It is still one of the best endings to a movie.  Well worth a visit.

After that we went to watch "Captain America"!!!  A really good romp.  Set in the second world war period, Steve Rogers tries to enlist but is turned down as unfit.  He eventually gets selected to join the Army but to a special unit, where he undergoes an experiment and becomes Captain America - a super hero.  It was fabulous fun - the kids will love it.  It's a 12A, so if you've got young ones, you might have to be careful, but the older kids will have a great time.

And now to some crafting.  I've been very busy in my craft room - but you'll have to wait until Sunday to see one of the cards - CR84FN - it's lovely!!!  I've done some remedial work on a couple of cards that I made last month.

The first one I made for the Waltzingmouse Blog Waltz last month - the theme was birthday party. I had been asked to make a card for a friend who liked coffee! So I made four! Unfortunately the green one - which was also for WMSC56 - was entirely successful. So I've had another go. I've used the same sentiment, but this time I've skipped the black border - I think it's much better. 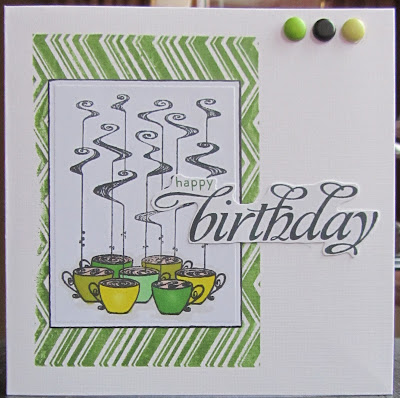 This was the orginal version - the black around the sentiment was not a good look! 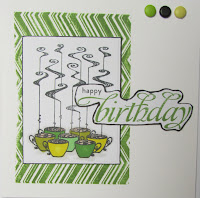 The other card that I've "fixed" is one that I made for the Less is More blues challenge.  I stamped a random pattern with Stampin' Up! Circle Circus - but I couldn't get it to work as a single layer card.  So I've had another go and I'm rather pleased with it this time. 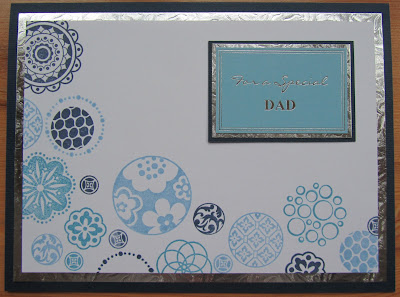 I mounted the original card onto some embossed silver card and then mounted all that onto a dark navy card base.  In my stash I have some birthday greeting toppers from a kit by Dawn Bibby that I got from QVC years ago.  I've not used many of them.  But the blue of the card is the same colour as one of the blues on the card - so I thought it would make a perfect topper.  I've mounted that onto layers of silver and navy.  A simple and elegant card - which I think I might send to my Dad.

That's all for now.  I'm off downstairs for a nice cup of coffee and catch up on some TV.  See you guys tomorrow.

Two gorgeous card Deborah, my fave is the blue one. Love the stamps and the sentiment is a perfect match.

Two gorgeous cards Deborah, I like the coffee cups and the green,and I like the stamping in the blues on the second card.
Kevin xx

You're making good use of your child free time :) I've not been to the flicks in ages!
Lovely cards you've re-visited, those coffee cups are still my fave with their swirly steam :)
Jenny x

I can vaguely remember the series of Planet of the Apes but not much more - sounds interesting what you saw.
I like both the revamped versions - that WMS stamp is particularly good.
Sounds like you're having great fun & thanks for your lovely encouraging comment about my rather long post. The builders are still causing havoc so it's hard to get my MCC homework done.
Paula (PEP)

I'm liking your movie reviews - I really didn't fancy the ape movie but your take on it sounds good so may rethink. We'll definately be going to see Captain America as Rick (my hubby) is a HUGE comic fan and even works in a comic store, so we go to see all the comic related movies.
Great save on both cards :-D
Tara
x

I would never have gone to see the ape movie but your review has sold my family! Who knows Deborah, there could be a while new career ahead of you! Great card fixes too!

You are amazing in casing your own cards... I love all the cups on the first one; so cute!
The second one is my favorite; I can't help it. Blue is my favorite color!
Hugs!