... Chrissie and Mandi have come up with a fabulous challenge for this week's Less is More theme - LIM46.  They want us to use the theme of music - musical instruments, manuscripts or simply base your card on a song title.  I've done both!

In my stash I have some lovely stamps from Elusive Images that have only seen ink a few times, but they are perfect for this theme.  Some holly, some ivy - the carol is one of my favourites - The Holly and the Ivy. 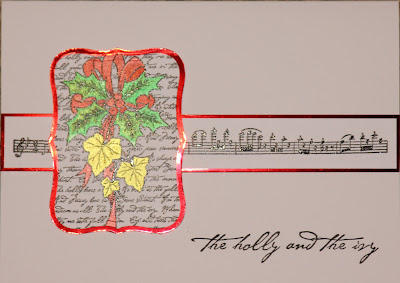 I stamped the image onto plain paper and heat embossed with clear powder, this gives an image that's really easy to paint.  I used Label 8 to cut out the image and then painted the holly, ivy, berries and ribbon with Twinkling H2Os - they have a fabulous shimmer, which is actually visible in this picture!  To get the red mat I put the die I used to cut out the image onto some red mirri card, taped it in place and then used my scalpel to cut around the outside of the die - giving a mat that is just a bit bigger than the image.  I stamped the line of sheet music onto white card, embossed it and then layered it onto some more red mirri.  Finally, I added the sentiment - positioning it with my trusty stamp-a-ma-jig!

Jonathan's home!!!  Yippee!!!  Our journey to the airport was a bit hairy!  It was dry when we left the house, but it started to hail by the time we got to the M56 and visibility wasn't good.  I slowed down and kept my distance, but there were several accidents on the motorway.  At the airport I turned up at the wrong terminal - silly me.  To be fair, it was the right terminal when Kathryn and I arrived home two weeks ago, but KLM switched terminals last week - and I hadn't checked.  Our journey home wasn't much better - it was still hailing like mad and one of the accidents (on the other side) caused the motorway to be closed for several hours.  I don't know what caused the accident, but some people don't put on their headlights or slow down - and I don't understand that!

Jonathan's had a nap this afternoon, but he's got absolutely no idea what time of day it is :)  I know that feeling :)  Still, that's all for now - I'm off to watch the final of Strictly Come Dancing - I've got no idea who's going to win this year, but I'd sort of like Chelsea to win.  Kathryn wants Aliona (Matt) to win!!  See you all tomorrow.

I've sung the Holly and the Ivy a few times this year already Deborah!
Charming card!
Thanks so much
Chrissie
"Less is More"

Good to hear you made it to the airport AND home safely despite the wrong terminal mix up.

Your card is lovely - a fabulous confection

I was rooting for Harry and Aliona - sorry!

So glad you're home safely - I don't understand that kind of driving negligence either!
Love the card - I've recently acquired these stamps & must also confess to loving the holly & ivy images around Christmas. That's my English childhood coming forth - the pine cones & Spruce are my Swedish side. Hope Jonathan recovers quickly.
Paula (PEP)

Great carol and great card inspired by it.

Strictly was fabulous wasn't it.

LOVE the shimmery look, it's a perfect 'Christmassy' card!

I like the shimmer as well. Great Christmas card!

Hola Deb, i'm glad to see you in my blog and read your kind comments:D
Congratulation!!!the family is together.
Beautiful card Deb in my balcony i have a big ivy :D i like the contrast with red, great idea.well done Deb.
A christmas hug from Palma

The Holly & The Ivy is one of my very favorite holiday songs--this is just beautiful, Deb! :) I have never used Twinkling H2Os, are they very expensive? I may need to add them to my wish list... ;D

Beautiful card :o)
Thank goodness you got home safely, there are some mad drivers out there!
Jackie xx

Lolvey card DEborah, the image works so well with the music

Thank you very much
mandi LIM

It's a lovely card! All that shimmer looks so festive--perfect for Christmas!

Great job on using the sparkling H2Os....makes a beautiful card, and your photographed it so that we can see the shine! Wow!

Another great card! The sentiment is gorgeous

Hi Deborah, that is gorgeous. You can really see the sparkle from the paints - lovely card Karen x

A smashing design Deborah & you've got me humming the tune now!
Sally x