....  it's taken me a bit longer than initially planned to get back to this challenge.  Over at Less is More the recipe for this week is to use three squares on your clean and simple card.  I saw the challenge on Saturday when it was posted and got my cards up quite quickly.  I made two versions of the card - one had no border and the other had an inked border - and I asked for feedback.  Thank you - I got 51 comments (up to now) with great feedback.  The most popular of the two cards was the first version shown below. 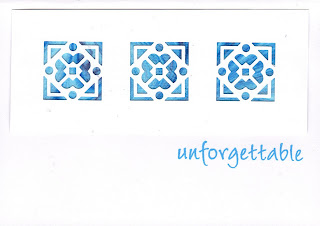 My preference was, and remains, the second version.  When I made the card I had planned on making a thin border of the same backing, but sadly there just wasn't enough paper left!  So I inked in the border, and it got a bit scruffy.  There were several comments from people who also felt that little extra was required, but perhaps a bit neater!!! :)  Yes, I agree - much neater!!  I've finally manged to grab some time in my craft room this morning and have made "Unforgettable - V3". 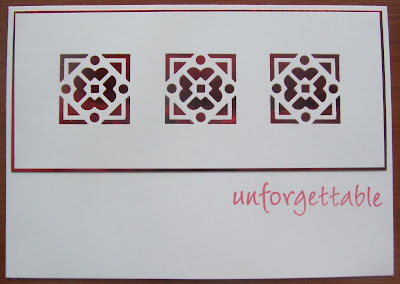 I didn't have any of the blue paper left, so I decided to go for a piece of bright red mirri card to go behind the punched squares.  I carefully trimmed the card to leave a very small border, and added the greeting in a coordinating red ink.  And I'm delighted with the card.  The sharper, geometric lines echo the border on each punched square and satisfy my desire for just that bit more!!  I think part of the problem with the first version is that the two white pieces of card are just slightly different colours - not terribly easy to see on the photo - but quite obvious in real-life.  On the red version - I made sure to use the same card for the base and the topper!  Makes a huge difference. 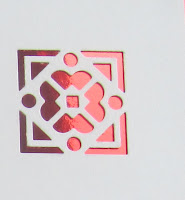 I've tried hard to get to see everyone's cards on the challenge, but real-life has intervened and I'm behind on CR84FN commenting, making challenge cards and visiting the cards samples for Claire's new launches.  On Saturday I mentioned the book I was reading - yes, well I finished it!!  I'm now on Book 4 - and it's not small book - and I think that might be why I'm a tad behind!!! :)  Loving it though!

That's all for now - thanks for taking the time to drop by and leave some comments - much appreciated.

This one does it for me Deborah... The border does look good and it isn't 'scruffy'... in fact it's all rather swish! That Mirri is beautiful!
Mark 3 has it for me!
See you soon.
Chrissie
"Less is More"

Yep, 3 is the magic number!! Still havent done mine yet for this challenge, hoping to get round to it later. I like the mirri layered behind, and yes it echoes the square perfectly! Xx

I actually like them all, but I see why you are partial to #3. That paper is GORGEOUS...and I have many papers that photographs just don't capture the beauty in real life.

Outstanding job on all of your projects Deb.

'EXCELLENT' I love this one.
Jose

All good and well done on "multiple choice"!

It's the best of both - and it's perfect!

I think they are both gorgeous. I know the second card is stunning but blue is my favorite color; forgive me :)
Enjoy your evening!

Just suer Deborah
Much crisper and works much better
Mirri picks up every reflection, its virtually impossible to photograph...well for me lol
mandi
"Less is More"

Fabulous card - definitely V3 for me

Wow! Version 3 is brilliant! Love that mirri card and the border really makes the whole thing pop.
Thank you also for the thoughts and hugs you sent regarding Scout. It really meant a lot to me.

Totally loving this version! The red really pops and the tiny little border is perfect!

Totally love your second card. This is so swish. x

This is definitely the onw - red mirri behind is brillant & I think you need the border. Mark 3 is the one for me.
Paula (PEP)

Well, you've really made an absolute beauty here Debs. It amazes me how the smallest of changs makes a real difference. Loving how you improved this card!
Hugs,
Sharon xx

I really like this card design, love the clean lines and simple design.