.... Morning all - I can't believe that it's already February!  January has simply flown by.  Anyhow, I've another card for this week's 52 {Christmas} Card Throwdown - 52CCT04-13 challenge to make a card using the Triple Stamping technique. I decided to switch things round a little and instead of a square card I've made a rectangular one. 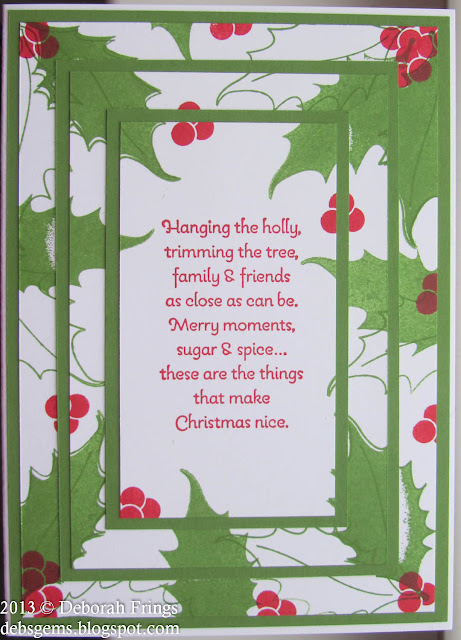 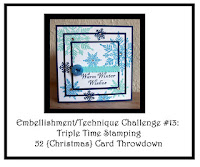 Same set of stamps as yesterday's card but opted for a slightly brighter green and used Gumball Green.  This vertical verse works so well on the card too.  For the inside I added a bunch of holly in opposite corners and used this wonderfully ornate Christmas stamp for the greeting. This is a super technique and makes such an elegant card.

That's all for now.

Very effective with the sentiment as the focal feature.
Paula (PEP)

Oh wow - another fabulous card Deborah. Love how the holly points to the sentiment. It's just terrific. Thanks for joining us this week again at 52CCT!

Deborah, this is simply beautiful. I love all of your layers, fabulous card.

Such a lovely effect Deborah and a fabulous Christmas card

This is FABULOUS, Deb!!! LOVE the holly berries and leaves and I like the clean and crisp feel of the whole thing! Thanks for joining us at 52CCT! :)

Oh this looks so neat ! Did you stamp it on all the layers or restamp then put together, love this!