.... Hi!!  This is a really quick post as I wanted to get my card up before running out to a PTA meeting and the shops!  And would you know it, it's raining!!!  This card is for three challenges:

It's taken me a long time to work out how to include orange in a Christmas card - but I think this works!! 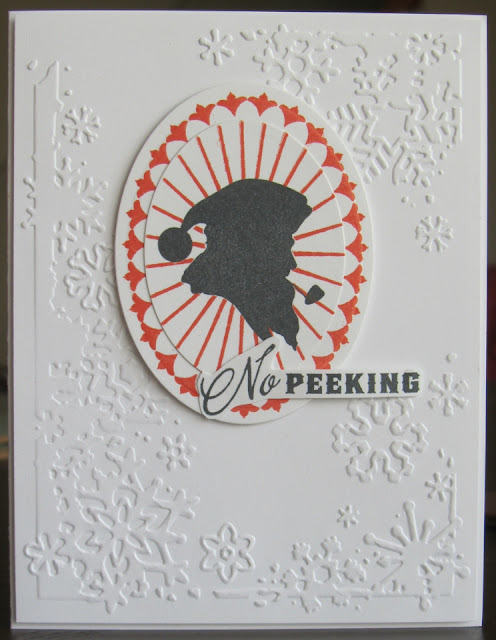 I'll be back later today to add details!  I've changed the photo - the sun is shining now and this is much brighter - you can really see the orange!! 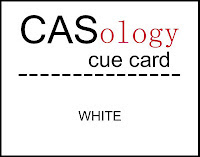 Okay - back now!  Had to rush out this morning to a PTA meeting at Kathryn's school.  There was a really big turn out - bigger than when I've been to PTA meetings in the UK.  I like that it was held at school during the day, as the Principal and Deputy were there to add information.  It was a good meeting, and I've signed up to help out at the upcoming Book Fair!

Now to add some detail to my post.  I think the oval for LIM is easy to spot.  I've done a cameo but with a twist - mine's Santa!  He's based on some cards I made last year and a witchy cameo that I made earlier this year.   To make the cameo I stamped Santa's head, masked him off then stamped the "sunray" pattern from Vintage ornaments, the I cut the oval with the smaller die.  I made a frame using one of the classic oval stamps and cut and embossed it.  The challenge at CASology is to use white!!!  Most of the DT went totally white, but as some had used a touch of colour I decided to add orange as my pop of colour.    For the July Waltzingmouse Christmas Card Challenge (yes, I know I'm very, very late) Lynn wants us to use the non-traditional colour ORANGE!!  To add interest to the white theme, I embossed a layer of card with one of my cuttlebug folders - distressed snowflakes - works really well behind the Santa cameo.  I finished off with this sweet sentiment.

That's all for now.  See you tomorrow!

Very pretty - love the embossing and all that white! Thanks for playing along with CASology this week!

Cute focal point. Thank you again for joining us at CASology this week!

Hi Deborah, Great card, I love the Santa silhouette and orange works too, lovely embossed background:0) Lovely to hear from you too:0) Gay x

Sorry, that's an awful lot of lovelies, please forgive me, I just get carried away LOL Gay x

What a clever card, Deborah! Your Santa cameo is brilliant. :) ann

Great to see you getting a jump ahead on Christmas preparations. Santa looks fab!
Thanks so much
Chrissie
Less is More

SMASHING card and I love the Santa silhouette

fanastic card, deborah! love the silhouette of santa and that pop of orange! thanks for playing along with CASology!

I love the splash of orange against the embossed background Deborah - a really super card! Vicky x

Fabulous use of orange on your Christmas card. Love how it makes Santa pop! Thanks for playing along with CASology this week!